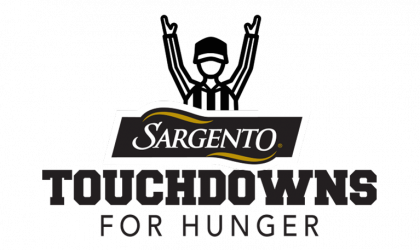 Every year Sargento teams up with our hometown NFL team, the Green Bay Packers, to help feed families in need. Through our Touchdowns for Hunger™ program, every time the Packers get into the end zone, Sargento donates $2,000 to hunger relief in Wisconsin. Since we became the Official Cheese of the Green Bay Packers in 2002, Sargento has donated more than $1.5 million through Touchdowns for Hunger. #TDforHunger

Our charitable partners for Touchdowns for Hunger™ include the Hunger Task Force in Milwaukee, Wisconsin and Paul’s Pantry in Green Bay, Wisconsin.

Learn more about their mission at HungerTaskForce

About Paul’s Pantry:  Paul's Pantry began as a result of a need to care for hungry people in the community who are unable to purchase enough food for their family as a result of their meager or no incomes. Paul's Pantry though, is more than just an emergency food pantry. Its goal is to provide a family with enough food every week, for as long as needed, so that they may use their food dollars for shelter, utilities and other necessities, and avoid becoming homeless.

Learn more about their mission at Paul’s Pantry

2019 Touchdowns for Hunger™ check presentation celebration at the Hunger Task Force in Milwaukee. This event is our way to thank the non-profit’s volunteers who help deliver the agency’s mission. 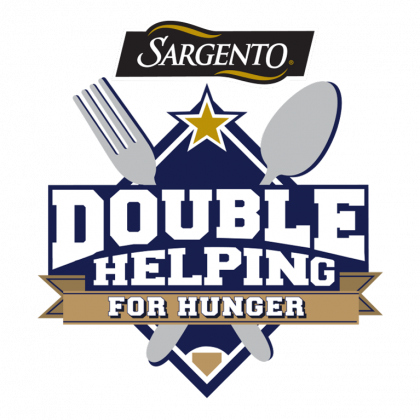 Our commitment to feeding families in need in our community became an all-star effort in 2018 when Sargento teamed up with the Milwaukee Brewers to begin our ‘Double Helping for Hunger™’ program. Every time the Brewers hit a double, Sargento donates $200 to the Hunger Task Force, Milwaukee’s Free and Local food bank and a leader in hunger relief in the state of Wisconsin.

In 2019, Brewers Outfielder Christian Yelich joined our team, supporting ‘Double Helping for Hunger™’ by promoting our effort on social media. “It's an honor to partner with Sargento," Yelich said. "It was brought to my attention how big the hunger problem is here in Milwaukee and the state of Wisconsin and how many people really need help. For (Sargento) to step up and do this and include me as a partner is an honor. Hopefully we can do our part on the field, hit a bunch of doubles and raise as much money as we can. It's nice to work with someone who shares your values," he said.

Toward the end of the season, Sargento CEO Louie Gentine presented our Double Helping for Hunger™ donation to Hunger Task Force Executive Director Sherrie Tussler at the baseball park.

For more than 25 years, Sargento has helped feed the homeless in Milwaukee through our support of the St. Ben’s Community Meal program. Every month, Sargento employees prepare and serve a meal at the Milwaukee outreach program. Many employees will sign up to make desserts or bring in food from their own pantries to share during the community meal. Our employees look forward to the meal every month because it shows our culture in action – providing Mutual Support for our neighbors.

S.E.C.A.P. Singers – In 1991 a group of Sargento employees formed a signing ensemble with the mission of spreading holiday cheer to senior citizens who can get lonely at Christmas time. This group became known as Sargento Employees Caring About People and every year since, they have been singing at community nursing homes around the holidays.

United Way – Our annual United Way campaign is among the top fundraisers for the Sheboygan County United Way. We are grateful for our employees who contribute to the campaign. Their contributions are matched by Sargento.

Day of Caring – Our employees enjoy participating in the Sheboygan County United Way’s annual Day of Caring where companies band together to tackle big projects for non-profit organizations. From painting, to pulling weeds, to preparing meals, this day proves how small actions and make a big impact.