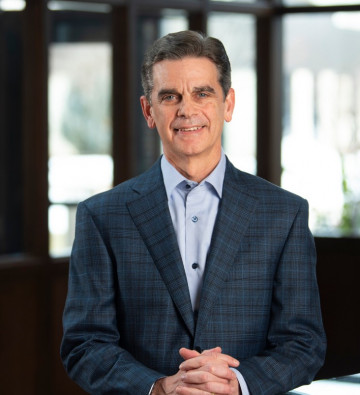 Appointed to his current role in 2016, Michael has responsibility for the Sargento business units, strategic planning and the company’s growth agenda.

Prior to his current role, Michael led the Consumer Products Division’s efforts as Division President from 2009 to 2016. During that time, his team accelerated the growth of the Sargento brand and built on the company’s legacy of successful innovations in the retail cheese category. In 2013, he was given the additional role of Chief Customer Officer. In this capacity, he also had responsibility for the ongoing performance of the Food Service and Ingredient Division.

Previously, Michael spent 20 years with Kraft Foods, Inc., where he held a variety of Marketing, Strategy, and General Manager Roles across the Cereals, Cheese, and Pizza Divisions.

Pellegrino was included on the “Forty Under 40” list in Crain’s Chicago Business magazine in 2002.

Outside of Sargento, Michael is a board member for Milo’s Tea Company, Inc., the Sheboygan County Food Bank and the Kohler Athletic council. He lives in Kohler, Wisconsin with his wife Maryellen and their four children.

< Back to Executive Leaders