Keeper of Our Community Outreach with St. Ben’s Community Meal Retires After 27 Years of Service

8 months ago Less than a minute to read 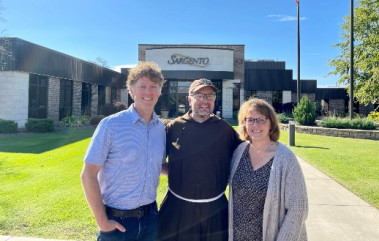 Like several members of the Sargento Family, Bernice Mattson prefers to stay, “behind the scenes.” The youngest daughter in a family of twelve, she grew up on farm understanding what role she had to play.

“We all had our chores to do. And the girls did the housework, while the boys did the outside work. That’s just how it was then,” she recalled.

In addition to hard work and loyalty, those lessons from the farm also taught Bernice something else: empathy. And though she likes to stay behind the scenes, that quality shines through in Bernice and has made her known across the entire the Sargento Family.

“Coming from a large family, there were 12 of us kids and my parents had to make money stretch,” she said. “I know deep down on a certain level, where those people at St. Ben’s are coming from - just trying to make ends meet.”

Throughout much of her career at Sargento that began August 7, 1995, as a customer service representative, Bernice has coordinated the volunteers and meals for the St. Ben’s Community Meal program which has been part of our Community Outreach since 1992.

“When you go to St. Ben’s, you see the need. A lot of people were fearful to volunteer, and they would say, ‘I’m going down to Milwaukee to feed homeless people? Really?! Is it safe?’ and I was like, ‘Yeah, of course it’s safe!’ They’re just people who need assistance. They just need a hot meal. And in fact, not everyone who attends is homeless. Sometimes it’s people who just want the social aspect of the meal,” she said. “There were some departments where it was harder to get people to participate, but once they would do it, they would say how it makes them feel so good. Going to see the need, especially seeing families with children, just tugs on your heart.”

Her success at winning hearts and minds has coordinated more than 20,000 hours of service at St. Ben’s and more than 5,000 volunteers. Bernice made the company’s passion for giving back her own and dedicated countless hours upholding that self-driven obligation. She did so to represent our values in the community and have others connect with who we are.

“It was Wendy Lueck who said I would be a good person to coordinate the St. Ben’s Community Meal program. I said yes knowing that I’d get to work with the different departments, getting to know more people. Jane Gundrum is now taking over once St. Ben’s gets back to in-person volunteers,” she said. “Those are the things that I feel really good about. The people and the friends that I’ve made.”

And it’s the people who IT Procurement Analyst Bernice Mattson says she will miss the most as her career at Sargento comes to an end. She has held several different roles in the company from International Customer Service Representative to IT Help Desk Assistant, to Transportation Specialist. In 2007, she returned to IT.

“Every position that I went to, I just learned so much! I had been at a previous employer for 20+ years and then I worked at Masters (Gallery) for probably 5 years. Chris Lieffring and I came from Masters around the same time. So, it was nice working with someone I knew,” she said. “I was hired by Sheila Thiel and in my first review I was asked, ‘Now that you’ve been here, what would you like from the company? What do you see for your goals?’ And even at that time, I said to her that my goal would be to retire from this company. And I’m doing it!” she smiled while clapping her hands.

Bernice had married her husband in 1981. He’s already retired and keeps busy in his workshop forging metal and wood. She’s not one for ‘honey-do’ lists, but she said they will travel more and see their 2 grandchildren.

“We bought the grandkids a globe and I told them to have mommy point to where MeeMa and Pa Pa are,” she laughed. “We want to visit the National Parks and maybe hike more of the Ice Age Trail. Eventually we’ll go to Ireland.”

Bernice Mattson has been part of the evolution of Sargento and in many ways helped guide the company to where it is today. She knows the only constant is change and she hopes the Sargento Family will always embrace it.

“Along the road of working at Sargento, there has always been bumps. There’s been down years. But the Gentine family has always been there, doing what they believe is the best for everyone. It’s a big task to be not only responsible for 2,300 people who work here, but also all of their families, and all of the communities that are supported by the company. That is so phenomenal from a family-run company. And the fact that they know your name,” she said right before trying to think of the theme song from the ‘80s sitcom ‘Cheers.’ “It’s a good company and no one should make light of the benefits that we have.”

After a long pause, Bernice took a small verbal step toward the spotlight she tries to avoid.

“I would like to feel that I made a difference. I’m just not sure…”

You have, Bernice. And we are forever grateful.