Double Helping for Hunger in its 2nd season has raised more than $80,000

3 years ago Less than a minute to read 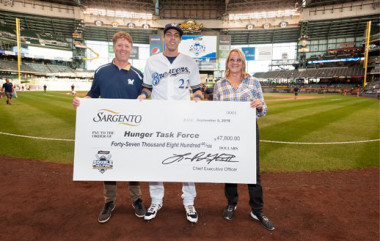 PLYMOUTH, Wis. – October 28, 2019 – Sargento Foods Inc., in partnership with the Milwaukee Brewers, has donated $55,800 to the Hunger Task Force in Milwaukee as a part of the annual Double Helping for Hunger program. As the Official Cheese of the Milwaukee Brewers, Sargento donates $200 to Hunger Task Force for every double the Brewers hit at home or away during the regular season. At the conclusion 2019 season, the Brewers hit a total of 279 doubles. Previously, donations only took place for doubles that were hit during home games. Sargento launched Double Helping for Hunger in 2018 and since has raised more than $80,000 to help alleviate hunger in Wisconsin.

With 2,300 employees and net sales of more than $1 billion, Sargento Foods is a family-owned company that has been a leader in cheese for more than 65 years. Founded in 1953 in Plymouth, Wisconsin, Sargento created the world’s first successful pre-packaged sliced and shredded natural cheeses. Today, Sargento Foods is still based in Wisconsin, where they manufacture and market amazing shredded, sliced and snack natural cheese products, as well as ingredients and sauces. Company leadership lives to serve local communities and employees, whom they refer to as the Sargento Family.