Sargento Foods Inc. Teams Up with NASCAR Driver Josh Bilicki After He Collided with Sargento Signage During a Recent Race in Wisconsin

6 months ago Less than a minute to read 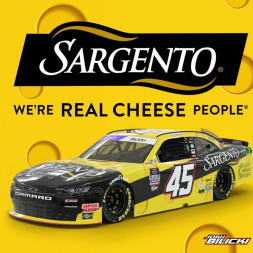 During a NASCAR race on July 2 at Road America in Elkhart Lake, Wisconsin – where Sargento is the Official Cheese partner – an incident occurred that resulted in Bilicki’s car carrying Sargento branding through the race. This unexpected collision - without injury - prompted this exciting partnership, bringing the Wisconsin-based company and racecar driver together. Bilicki and Sargento will be joining forces and surely making their home state of Wisconsin proud at the upcoming race.

"I am excited for this opportunity to partner with Sargento at Watkins Glen Raceway this August,” said Bilicki. “As a native Wisconsinite, I have enjoyed Sargento products for many years. I am a true believer that everything happens for a reason, including my recent run in with the Sargento sign. I am thankful to be welcomed into the Sargento family and to represent a Wisconsin-based company in my upcoming race."

“Sargento has been a long-time partner of Road America and we are proud to have this iconic landmark in our own backyard,” said Louie Gentine, CEO of Sargento. “When we saw our sign on the front of Josh’s car, we had the same reaction as many others. We like to have fun so, we’re excited to partner with the Wisconsin native for this upcoming race.”

Sargento will be Bilicki’s primary sponsor at the NASCAR Xfinity Series races in Watkins Glen, New York on August 20, where Sargento branding will be prominently featured on Bilicki’s Chevrolet Camaro racecar. Fans can follow Sargento on Instagram @sargentocheese and on Twitter @SargentoCheese for behind-the-scenes content leading up to the race!

With over 2,000 employees and net sales of $1.5 billion, Sargento Foods is a family-owned company that has been a leader in cheese for more than 65 years. Founded in 1953 in Plymouth, Wisconsin, Sargento is proud to be the company that successfully introduced America to pre-packaged sliced and shredded natural cheeses and cheese blends. Today, Sargento Foods is still based in Wisconsin, where they manufacture and market amazing shredded, sliced and snack natural cheese products, as well as ingredients. Company leadership lives to serve local communities and employees, whom they refer to as the Sargento Family. www.sargento.com

Josh Bilicki began his racing career at the early age of four when he got behind the wheel of a go-kart for the first time at Badger Kart Club in Wisconsin. After over ten years of success across multiple different karting categories, including shifter karts, Bilicki transitioned to full-size cars at age 14.  After multiple years racing sportscars at an amateur rank, Bilicki made his professional racing debut in IMSA in 2015. After spending a year racing in IMSA and the Trans-Am Series, Bilicki made his NASCAR debut at his home track of Road America in 2016.

Bilicki made his first NASCAR Cup Series start at Sonoma Raceway in 2017. 2021 marked Bilicki’s first season in the Cup Series. For the 2022 season, Bilicki makes the move to Spire Motorsports in the NASCAR Cup Series and has also added multiple NASCAR Xfinity Series races to his schedule with Alpha Prime Racing.